Life has faced many challenges as it has scrambled over this blue marble; many times, it has seemingly reached the brink, only to come back with surprising vigour. Now, researchers have finally figured out how living things could have survived a colossal glaciation event known as the Cryogenian Period.

This Snowball Earth, as it is also known, lasted from 720 to 635 million years ago. And you`d think that a layer of ice over the ocean, cutting off the oxygen supply, would have hindered the forward march of animal life; but fossil evidence indicates that this wasn`t even remotely the case.

Rather, life survived, then bloomed in the wake of Snowball Earth. According to the new research, this was possible because meltwater from glaciers created oxygenated pockets in the oceans. In these oases, chemosynthetic life could wait out the ice age to emerge and continue on the other side.

"The evidence suggests that although much of the oceans during the deep freeze would have been uninhabitable due to a lack of oxygen, in areas where the grounded ice sheet begins to float there was a critical supply of oxygenated meltwater," explained sedimentologist Maxwell Lechte of McGill University in Canada. "This trend can be explained by what we call a `glacial oxygen pump`; air bubbles trapped in the glacial ice are released into the water as it melts, enriching it with oxygen."

Although the fossil record from that time is really, really sparse, there are geological traces of the conditions on Earth at the time. The sediments deposited on the seafloor, specifically those rich with iron, allowed Lechte and his team to reconstruct the oxygenation levels.

Previously, it had been assumed that life must have somehow held out in meltwater puddles on the surface, but what the team found suggests another way.

They studied iron formations across three continents - the Chuos Formation in Namibia, the Yudnamutana Subgroup in Australia, and the Kingston Peak Formation in the US. 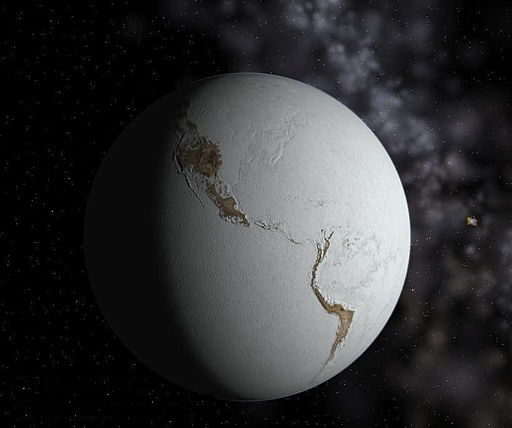 Overall, iron isotope ratios and cerium anomalies from glaciomarine environments reveal that the waters were mostly extremely oxygen-deprived - but the closer one draws to the ice-shelf grounding line, the more oxidised the deposits grow.

Any eukaryotic life that lived in those aerated waters would also have needed food in order to thrive. The iron may be a clue to this.

We know that the seawater was rich in dissolved iron. And we know that today, there exist chemotrophic bacteria that derive their energy from the oxidation of dissolved iron, shedding the iron oxides when they are done with it.

So the oxidised deposits around the ice shelf grounding line could have been caused by iron-oxidating marine bacteria, drawn to and thriving in the oxygenated water.

We have no hard proof that this occurred, of course, but it`s a credible theory that fits the available evidence - and it neatly wraps up a couple of conundrums about Snowball Earth.

"[The study] not only provides an explanation for how early animals may have survived global glaciation, but also eloquently explains the return of iron deposits in the geological record after an absence of over a billion years," said Earth scientist Galen Halverson of McGill University.

We`ll need more research to figure out how these environments could have sustained a food web. There are glacial ecosystems and ecosystems in the frozen polar regions that support a surprising diversity of life today; these could be good places to look next, the researchers suggest.

The research has been published in PNAS.

WATCH: Buying the MOST EXPENSIVE Sunglasses!