US
Vodafone switches on 5G network in seven UK cities

Vodafone has become the second UK mobile operator to turn on its 5G network, offering faster speeds and the opportunity for new services.

The network is going live in seven UK cities, including Cardiff, London, Manchester and Glasgow.

Making a success of the service could be crucial to the firm which has seen financial losses and customer complaints in recent years.

5G networks offer more capacity than 4G with speeds up to 100 times faster.

It could also help support new technologies such as artificial intelligence, the internet of things, robotics, connected cities and self-driving cars.

The three other cities to benefit are Birmingham, Bristol and Liverpool.

Vodafone is the first UK provider to offer 5G roaming in Germany, Spain and Italy.

Business director of Vodafone UK, Anne Sheehan, said: "5G is a game-changer for the economy and UK businesses. We are committed to helping our customers take advantage of this technology by making it widely available in the UK and through roaming. We want to help UK businesses become global leaders and 5G will play an important role in achieving that aim."

Vodafone is offering three pricing options for SIM only:

Unlimited Max: £30 per month, giving users unlimited mobile access at speeds as fast as the device and the network will allow.

Vodafone Unlimited: £26 per month and offering speeds of up to 10 Mbps (megabits per second) 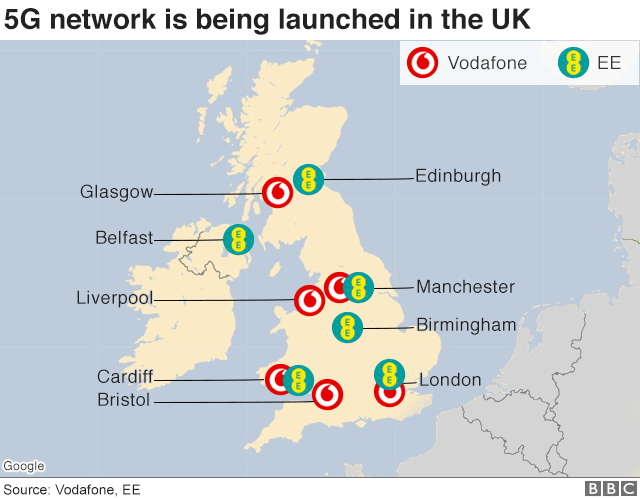 Vodafone Unlimited Lite: £23 per month and offers speeds of up to 2 Mbps

Tariffs that are structured by data speed are "a first for the UK" said mobile analyst Kester Mann, of research firm CCS Insight.

As such, Vodafone will need to explain this to customers who are "only just beginning to understand the value of megabytes and gigabytes".

To encourage small businesses to take up 5G services, Vodafone is offering a series of new plans that give business customers access to unlimited data and 5G at the same price as 4G.

5G is finally here. So what does it offer?

EE launches 5G networkRival Three plans to roll out 5G in August with services from O2 coming in the autumn.

"After a hotly contested battle with Vodafone, EE claimed the honour of switching on the UK`s first 5G network, in May 2019. However, the reality is that being first means little to consumers and the initial launches this summer represent only the first few tentative steps in a marathon 5G journey ahead," said Mr Mann.

"The real winners in 5G will only become apparent several years down the line."

The UK has put itself at the top of the leader board with its swift adoption of the technology.

"In 2012, the UK was only the 53rd nation to launch 4G behind places such as Guam, Azerbaijan and Kiribati. Now, with all four networks planning to switch on 5G in 2019 it moves from laggard to leader," said Mr Mann.

All the UK`s operators continue to use Huawei`s equipment despite controversy surrounding the Chinese telecoms firm. If the UK government decides it is no longer safe to rely on having it as part of the network, the operators would be forced to strip out its kit and replace it.

The Last Solar Eclipse of 2019 Will Create a Beautiful...