US
Tardigrades Are Basically Indestructible, But Scientists Just Found Their Weak Point

Call made to Tardigrades are tough little critters. When conditions get nasty, they can dry out, reconfigure their bodies and enter suspended animation - called dessication - for years. You can throw virtually anything at them: frozen temperatures, zero oxygen, high pressures, the vacuum of space, cosmic radiation, and even being boiled.

But new research has shown these tiny organisms may have a weakness - long-term exposure to high temperatures, even in their dessicated state. The longer the temperatures are maintained, the lower the tardigrades` chances of survival.

The research shows, its authors said, the importance of understanding the impact of rising global temperatures wrought by anthropogenic climate change on all our planet`s creatures.

Around the world, warming is already impacting both plant and animal life. Some species are expected to weather the changes better than others; cockroaches, for example, are very hardy and adaptable. Tardigrades, the microscopic invertebrate creatures also known as water bears or moss piglets, are among the hardiest animals known. There are around 1,300 known species, most of which are between 0.3 and 0.5 millimetres in length.

They live mostly in wet environments, both marine and freshwater sediments, in mosses and algaes, leaf litter and mud volcanoes, from the equator to the poles. They have tubby little barrel bodies, with eight stumpy little legs, and they look sort of more clumsy and adorable than anything.

To remain active, tardigrades need to be surrounded by a film of water. When they need to hibernate, they retract their head and legs, and almost completely dry out, a shape known as a `tun` (named after the barrel they resemble). 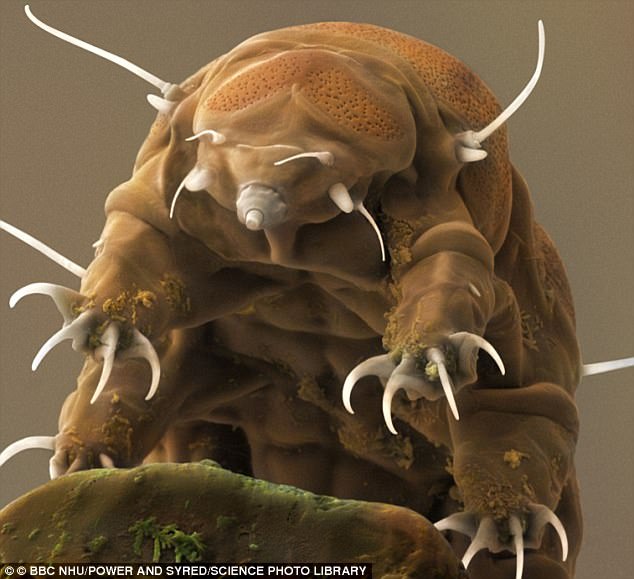 So effective is their extreme hibernation, tardigrades have survived five mass extinctions over Earth`s history; and a 2017 study found that the only way to wipe them out would be to boil away Earth`s oceans (which will happen one day, but not, hopefully, for another billion years or so).

But climate change could give these enigmatic creatures a hard time. A 2018 study found a species of Antarctic tardigrade, Acutuncus antarcticus, could be at risk of extinction due to climate change. Now a second species, Ramazzottius varieornatus, has demonstrated a similar weakness.

"The specimens used in this study were obtained from roof gutters of a house located in Nivå, Denmark," said biologist Ricardo Neves of the University of Copenhagen in Denmark.

For active tardigrades that had not been acclimated to higher temperatures, the population hit a 50 percent mortality rate after spending 24 hours in just 37.1 degrees Celsius (98 degrees Fahrenheit; they`d probably be in a bit of a pickle in Australia). Dessicated tardigrades were able to withstand much higher temperatures; a 50 percent mortality rate after 24 hours was observed at 63.1°C (145°F), and additional experiments revealed the creatures will die far more quickly when temperatures are cranked even higher.

Previously, a 2006 study showed that dessicated tardigrades could survive temperatures up to 151°C (300°F) for up to half an hour. What this new study demonstrates is that the overall tardigrade survival rate drops off steeply the longer the temperature is maintained at unhealthy heights.

"From this study, we can conclude that active tardigrades are vulnerable to high temperatures, though it seems that these critters would be able to acclimatise to increasing temperatures in their natural habitat," Neve said.

"Desiccated tardigrades are much more resilient and can endure temperatures much higher than those endured by active tardigrades. However, exposure-time is clearly a limiting factor that constrains their tolerance to high temperatures."

The research has been published in Scientific Reports.

US lawmakers concerned by accuracy of facial...
Latest Videos