A country of 80 million people - and practically no way to get online. Iran`s internet shutdown has lasted for four days now, sparking international concern.

On social media, Iranians living or travelling abroad have shared stories of being cut off from their families and friends back home.

Many are still waiting for news of their welfare. 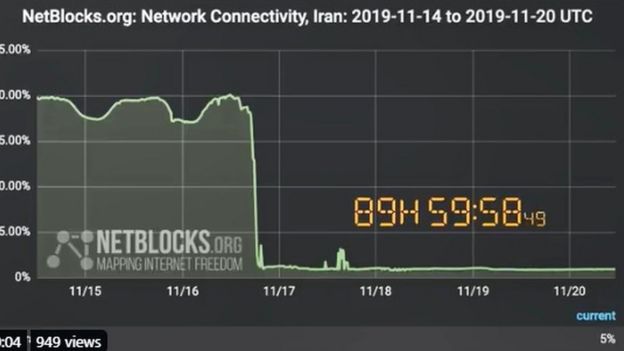 "We detected fluctuations in regional connectivity," he told.

"This extended towards having national impact by later in the evening."

Since then, internet traffic in the country has plummeted to 5% of normal levels, according to NetBlocks.

NetBlocks tracks connectivity in countries around the world by scanning the internet for communications devices - routers, servers, mobile phone towers - and keeping a database of those known to be online in each territory. 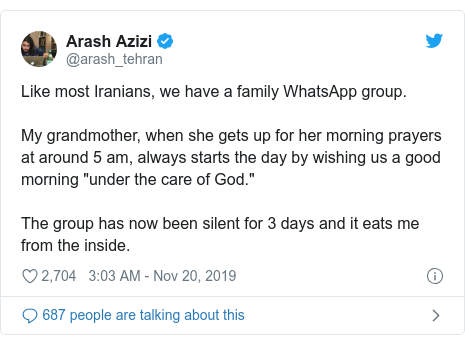 By periodically sending brief messages over the internet to these devices, a practice called "pinging", NetBlocks and similar organisations can see when they go offline.

Mr Toker says he is taken aback by the extent of the blackout in Iran: "This is on a different scale to other instances we`ve seen around the world."

He points out that the internet system in the country is not a single network that is easy to switch on or off.

Rather, a bit like in the UK, it is formed of a series of privately-owned networks that link together. Disrupting such a system is not straightforward.

However, connections to the outside world in Iran are funnelled through just two entities: the state telecoms firm and the Institute for Physics and Mathematics, which means that authorities are more easily able to block communications in and out of the country.

"If you architect your country`s internet access so you control the gateways, i.e. create choke points, you can censor at will," says Prof Alan Woodward, a cyber-security expert at the University of Surrey.

NetBlocks has been able to detect the disconnection of internet devices with fixed line connections as well as the loss of service at mobile phone masts - which demonstrates that wireless mobile internet is also disrupted.

One Iranian journalist managed to tweet a message to the outside world by connecting to a series of proxy servers - internet devices that are linked in a chain in order to transmit data between networks.

It might also be possible for individuals in Iran to use satellite internet or roaming SIM cards to access the wider internet. 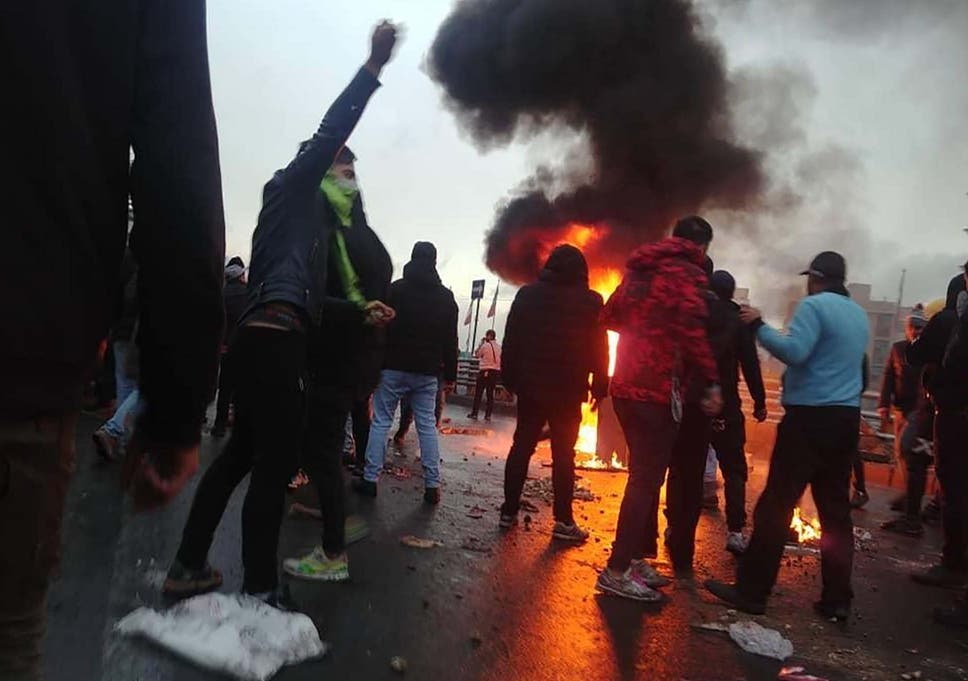 However, these methods are not guaranteed to work and may be monitored by authorities.

For most, the blackout is impenetrable.

Behrang Tajdin, a correspondent with BBC Persian says that, like many of his colleagues, he has lost internet-based communications with contacts in the country.

"I can`t remember the last time that we had a full blackout for four days," he says.

Tech firm Oracle`s internet-monitoring service has described it as "the largest internet shutdown ever observed in Iran".

Mr Tajdin notes that Iran has spent years developing an internal "intranet" network so that certain branches of government and banks, for example, can stay online inside the country during shutdowns that cut Iran off from the outside world.

"People can still access domestic websites that are connected to this network, which means that Iranian apps can work, websites can work although there`s no [international] internet access," he explains.

The existence of this internal intranet has caused alarm among those who think Iran could use it to justify ever longer and more disruptive internet shutdowns.

Besides social consequences, there may be serious economic ones too, says Mr Toker.

"It`s a harmful strategy and sets a dangerous precedent," he adds.

Geologists May Have Finally Solved The Secret of Machu...