A robot cat designed to ferry plates of food to restaurant customers has been unveiled at the CES tech expo in Las Vegas.

BellaBot, built by the Chinese firm PuduTech, is one of a number of wacky robotic inventions being shown off at the event this year.

There is also UBTech`s Walker, which can pull yoga poses.

And Charmin`s RollBot. It speeds a roll of toilet paper on demand to bathrooms that have run out of the stuff.

One expert said it was likely that robots exhibited at CES would only continue to get more bizarre in the future.

BellaBot, the table-waiting robot cat, is a service bot with personality. 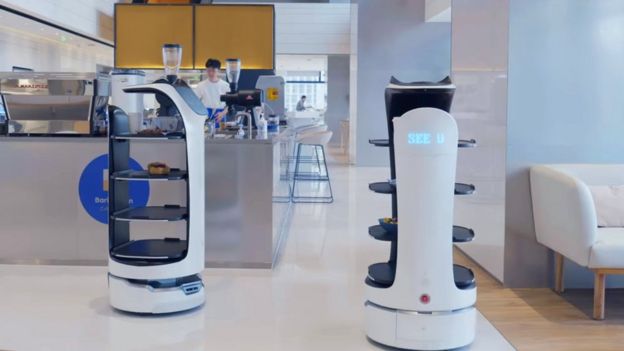 It updates a previous model that had a more utilitarian design. BellaBot, in contrast, features a screen showing cat-face animations.

It mews when it arrives at tables to encourage customers to pick up their food.

And if the diners stroke BellaBot`s ears, it initially reacts with pleasure.

"The owner`s hand is so warm," the bot is programmed to say in response.

But if customers continue petting it for too long, its expression changes.

"It gets mad to remind you not to interrupt its job," explains the firm. 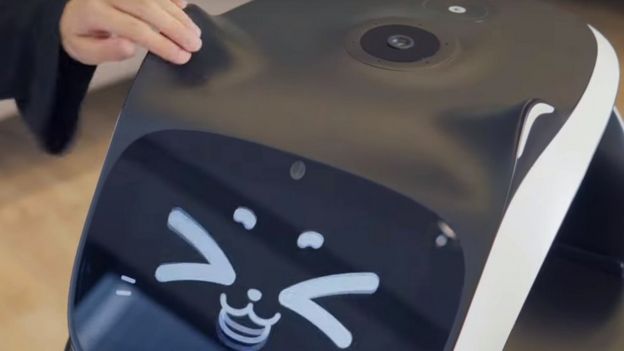 The Chinese company is targeting the machine at restaurant owners in China, who often struggle to employ enough waiting staff, according to PuduTech.

The firm`s existing robots are already in use at 2,000 restaurants worldwide.

It plans to show off the new device at a booth designed to look like a futuristic restaurant when the CES show floor opens on Tuesday.

But BellaBot may find it harder to operate in the real world, commented tech consultant Paolo Pescatore from PP Foresight, because of the challenge of navigating restaurants at busy times.

He added, however, that restaurants are expected to become increasingly dependent on automation in one form or another.

UBTech`s newly-updated Walker bot is also being shown off at CES this year. 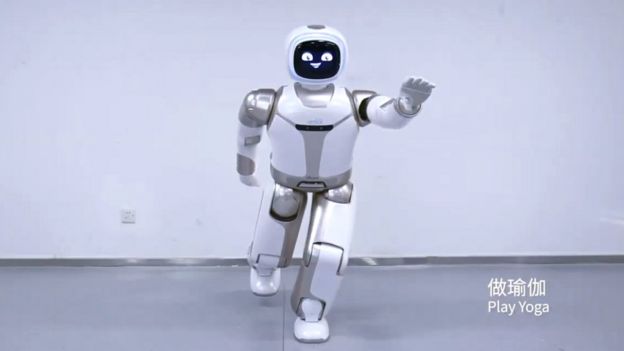 The model can perform a series of Tai Chi and yoga poses, demonstrating a "huge improvement in motion control", according to its maker.

"It`s continuously tracking its overall centre of gravity throughout the yoga positions - the kind of dynamic [artificial intelligence] you would expect of a robot that `lives` in your home alongside your family, going up and down stairs, carrying heavy objects for you," explains UBTech spokesman Jeff Gordon.

Walker`s other abilities including being able to push a cart, draw pictures and pour liquid into a cup.

And Procter & Gamble`s American loo roll business, Charmin, has attracted a flurry of attention with an unusual droid designed to complement toilets and bathrooms: RollBot. 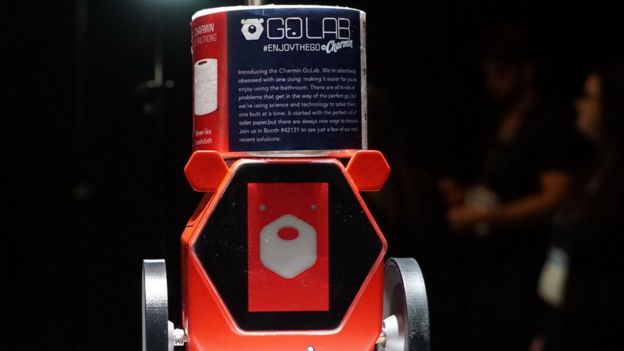 "Imagine yourself there, you`ve run out of toilet tissue, nobody hears your call," P&G researcher Gregg Weaver told the BBC.

"The robot will find you in the home and deliver you a fresh roll."

RollBot is summoned via Bluetooth on a smartphone.

However, P&G currently has no plans to make it commercially available - which may mean waiting a little longer for that desperately needed roll.

Thanks to improvements in hardware and software capabilities, robots will gradually become better and better at expressing themselves and mimicking human capabilities, predicted Mr Pescatore.