US
8 Apollo Astronauts Reunited For Moon Landing`s 50th Anniversary, And We Can`t Deal

Only four men alive today have walked on the Moon. Last month, three of them got together in the same room. NASA`s Apollo program ran 17 missions, which are best known for putting the first people on the Moon in 1969.

Humanity hasn`t set foot on the Moon since NASA`s Apollo 17 mission in December 1972.

Last month, ahead of the 50th anniversary of the first Moon landing – which happened on July 20, 1969 – eight of the 17 surviving Apollo astronauts gathered together for an early celebration at The Explorers Club in New York City.

Event photographer Felix Kunze captured the portrait of the eight men that you see above. Buzz Aldrin, the second man to step foot on the Moon (after Neil Armstrong), stole the show. Or rather, his outfit did.

"His suit was drawing almost as much attention as the man himself," Kunze told Business Insider.

Aldrin has a history of sporting colourful outfits. He even walked in a New York Men`s fashion show with Bill Nye in 2017 wearing silver sneakers, a metallic jacket to match, and a shirt that said "Get your arse to Mars."

He continues to advocate for sending future missions to the Moon and Mars. 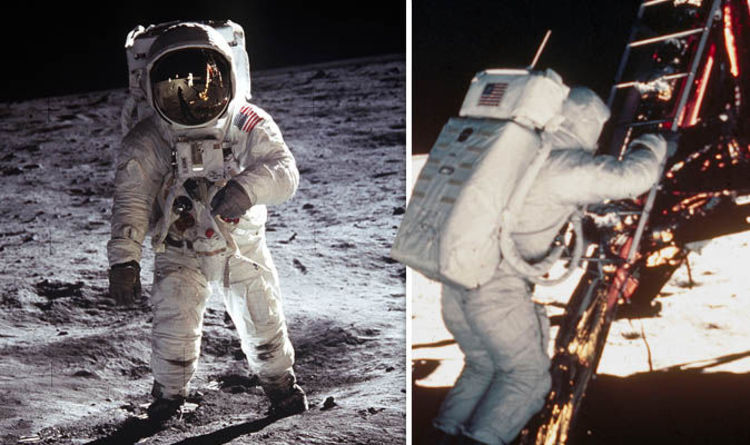 "I can`t think of a more appropriate time than five decades from the time that the first Eagle [lunar module] landed on the Moon to discuss that the US might lead internationals… to put another eagle on the Moon," Aldrin previously told Business Insider.

Aldrin and Collins almost didn`t get homeSix of the astronauts – Duke, Worden, Cunningham, Schweickart, Aldrin, and Collins – spoke on a panel hosted by The Explorers Club, as Space.com reported, and recounted some of their hair-raising experiences during the Apollo missions.

Aldrin and Collins reportedly described how Aldrin and Armstrong almost didn`t make it back off the Moon`s surface. (Collins stayed in the command module in lunar orbit in order to reconnect with the other two astronauts on their return.)

Apollo 11`s lunar module, "Eagle," ferried the astronauts to the Moon`s surface and back. But while on the Moon, Aldrin discovered that a piece of the module was broken.

"I laid down on the floor with my head to the right, which is the co-pilot`s side, and I`m looking around at the dust that came in, and there`s this little black object. Didn`t look like it belonged there. Looked a little closer … this was a circuit breaker that was broken," Aldrin said, according to Space.com.

That circuit breaker was a critical piece of machinery that would help the lunar module get back to Collins in orbit. "If they couldn`t get off, they were dead men, and I was getting home by myself," Collins added, according to Space.com.

Luckily, the astronauts were able to jerry-rig a solution to the problem. Aldrin used a pen to push the button in, and the two were able to leave the Moon.

Recently, the US has renewed a push to return men to the Moon. On March 26, Vice President Mike Pence announced plans to send astronauts back to the lunar surface by 2024, according to the Associated Press.

NASA Administrator Jim Bridenstine has also said that getting boots on the Moon is ultimately a step toward the goal of getting astronauts to Mars by the year 2033.

The Lotus Evija is the most powerful production car...