US
`Silicon Valley nonsense`: Will Uber drivers be heard

Uber drivers protested around the world on Wednesday. It was a spirited, though largely unquantifiable, demonstration against what they see as disgracefully low wages, poor job security, and an unacceptable lack of benefits.

Above all, though, it was a rallying cry against the expanding gulf between their lives, and the lives of those who will become unfathomably rich when Uber makes its stock market debut on Friday.

“I have no problem with the company making money,” said Eddie Wheeler, an Uber driver for almost three years.

"What I have a problem with is the way they made it. They made the value off my back, and the backs of every driver."

People like Mr Wheeler have little collective power. They cannot unionise, though there are some emerging groups trying to help represent the needs of “gig workers”, albeit without a real seat at the negotiating table. The efficacy of this kind of action is also held back by the very issue they’re fighting against: many drivers simply couldn’t afford to take the time off to join in.

Still, drivers are doing what they can to make their voices heard. As well as those protesting in person on Wednesday, a number more said they planned to contribute by turning off their apps for a set amount of time - in some cases as long as 24 hours - in an attempt to limit the number of drivers out on the road and make it harder for customers to get a ride.

But a source at Uber told me the impact has been miniscule. In New York, fewer than 1% of drivers that would typically drive on Wednesdays switched off - and we have no way of knowing if that was even part of the protest. More broadly, in all the cities that took part, Uber did not see any meaningful effect on its service - there were no noticeable increases in wait times, or instances of surge-pricing (whereby fares go up because there are fewer drivers available).

A waste of time, then? Perhaps - it’s certainly hard for drivers to be enthusiastic about their chances of getting better terms from Uber, when on Friday a whole new batch of eager shareholders will be pushing for the company to turn around its enormous losses.

Nobody from Uber addressed the protests in San Francisco, or at any of the other locations globally. In a statement, the firm - and its main competitor, Lyft - said it was always looking at ways to improve its relationship with its workers. 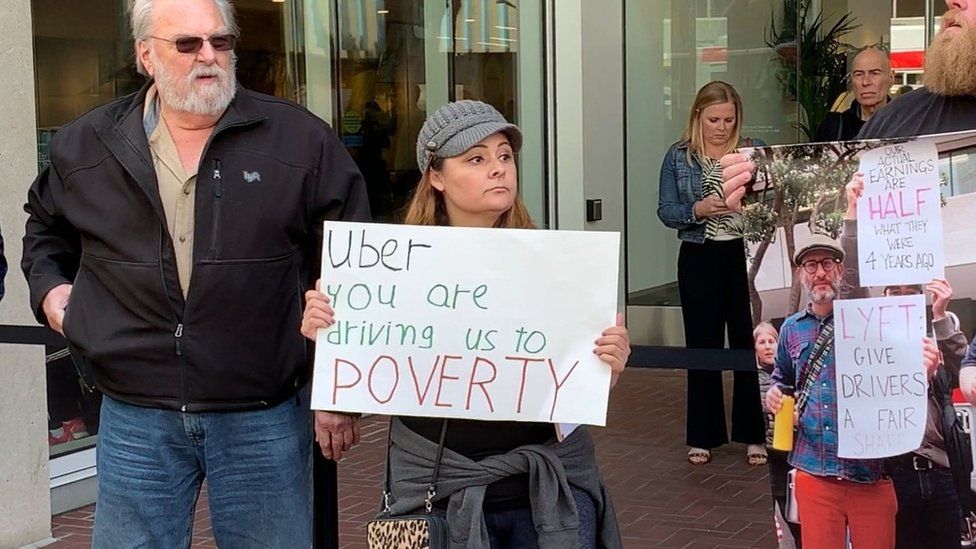 Drivers at the protest said they had reached breaking point, and feel Uber should ignore their concerns at their peril.

“It’s not livable,” said Annette Rivero, a driver for two years. She said she drives 12-14 hours a day.

“The time we`re putting in is dangerous, it`s too many hours to be out on the road.”

Those concerns might find these drivers a different audience that can help: government. On the presidential campaign trail, most Democrat candidates have backed an expansion of the US National Labor Relations Act, first written in 1935, to include added protections for gig economy workers.

Changes in the law could have a dramatic, maybe fatal, effect on businesses like Uber. Having to pay workers more, or offer benefits, would certainly put a bigger question mark over the company’s predicted $90bn valuation.

When I asked driver Jeff Perry about this, he seethed. If the company can’t afford to pay its workers, he argued, it should not be worth anything at all.

"How is that possible? This is Silicon Valley nonsense math."

WATCH: BEST OF THE WEEK - Fish Eats WHAT!